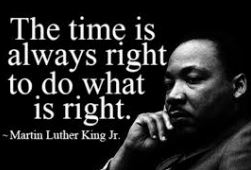 “The time is always right to do what is right.” – Martin Luther King Jr.

I love this quote from Martin Luther King Jr. The saying is true.

I know some might not agree with me, but I believe I know, in a small way, what it is like to be persecuted because of the color of one’s skin.

I am a white male. I grew up in a middle class family. Or, at least, I thought I was middle class. Looking back now, we were probably below middle class at times. My father struggled without work from time to time. Somehow we always made it through.

When I was 19 years old I served a mission for my church.

I lived in Mexico for nearly 2 years.

During that 2 year period, I learned to speak Spanish.

I came to a point where I felt that I was Mexican. I did not see myself as different than those I lived with, lived around, and spoke with.

Then there came a moment when I realized I was being treated differently.

I hailed a taxi (as was the common practice) and I was quoted a higher fare than was normal.

I knew the fare was higher because I had been paying a lower fare for the same trip for some time.

I asked why the high price. I was told because I was a rich gringo.

Now, I was somewhat taken aback by this treatment because I felt just like the taxi driver. I felt as Mexican and one can feel. I took taxis and buses, I lived among them, I spoke their language, yet, because of the color of my skin (and perhaps my white shirt and tie), I was called a rich gringo.

I told him that I was his countryman and if I removed the tie, what the price would be. He lowered it to slightly above the normal fare.

Not being the best haggler, I accepted the offer and my companion and I boarded the taxi and were off to our destination.

We ought to remember them and we all ought to fight for what we believe to be true and right.

We are all equal. We ought to treat each other equally because we are.

I have thought of my experience in Mexico. It reminds me to be kinder to others.

Although I know I fall short, very short, I need to keep trying.

May you enjoy the successes that come to you for fighting for what you know is right.